There is a strong pattern in the behavior of the stage, which shows itself as soon as one simulates a month or two of its orbit. The orbit oscillates, becoming more circular for about 12 days, and then moving back towards being more eccentric...more egg shaped. What is driving this pattern? In this post we will dig in to understand it in more detail.

This is a plot I shared in an earlier post, simulating the first two months after the stage was placed in orbit, and the oscillation is visible as the waviness of the minimum and maximum altitudes. The peaks occur about once every 25 days.


Here is another plot, simulating the stage orbit in the year leading up to the 50th anniversary of the mission. In this plot only the perilune points of each orbit are shown, but the same 25-ish day oscillation is still a major feature of the orbit.

The 25 day period is intriguing, since it is very close to the 27.32 days required for the moon to complete one rotation around its axis. But the difference between 25 and 27 is critical, since it means that the stage orbit oscillation is not directly tied of the moon's rotation. At least not in any obvious way.

When I first started running simulations of the stage, I was hoping to find an impact crater, and this required that the stage decay out of orbit quickly. Once I got going with the simulations, and the stage seemed to be long lived, there was one thing I noticed which kept me looking. I was interested in the lowest points of the orbit, the ones where the stage got below 20 km. Interestingly, these points always occurred at a similar location, around 30 degrees east longitude.


This result gave me some sliver of hope that I might yet find a crater...perhaps there was a lone mountain on the moon at 30 East, near the lunar equator, that acted as a giant catchers mitt, snagging the stage as it came whizzing by on a particularly low pass. So as I began to run longer simulations, I didn't just record the altitude of the perilune points. I also recorded their latitude and longitude.

One day, by accident, as I was plotting the results from a simulation run, I happened to plot both perilune altitude and longitude on the same graph, and something like this appeared: 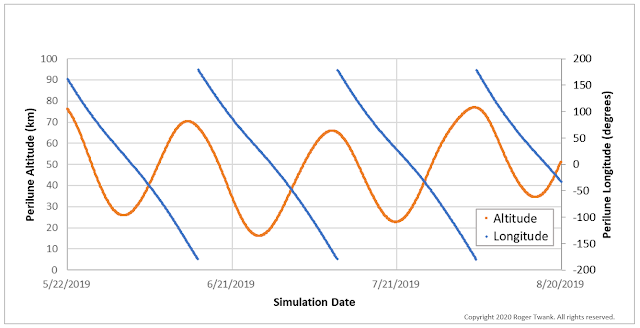 The blue lines are longitude, while the orange line is altitude, from a simulation of a few months of 2019. What is important to notice is that there is a direct correlation between longitude and altitude. The peaks in perilune always occur near longitude 180 (or minus 180...same place) which is on the far side of the moon.

OK. Wow! That was a surprise to me. But something was not adding up. The plot is saying that the stage orbit perilune point moves all the way around the moon in 25 days. More correctly, what is happening is that the moon is rotating beneath the orbit, and it should take about 28 days to complete a full rotation. So how is the perilune point getting all the way back to the same longitude in less than 25 days? The answer is "precession".

Perhaps you have seen a gyroscope precessing as it balances on a pedestal. There is a nice video example here. Orbits also precess, and you can see a nice illustration (greatly exaggerated) here. In the case of the stage orbit, it is also slowly precessing, in a direction opposite to the rotation of the moon. The illustration below is not to scale, but shows how the major axis of the stage orbit changes over one month. The net effect is that the moon does not have to complete a full rotation for a given longitude line to come back under the low point of the stage orbit. It gets there a few days early. Just under 25 days. 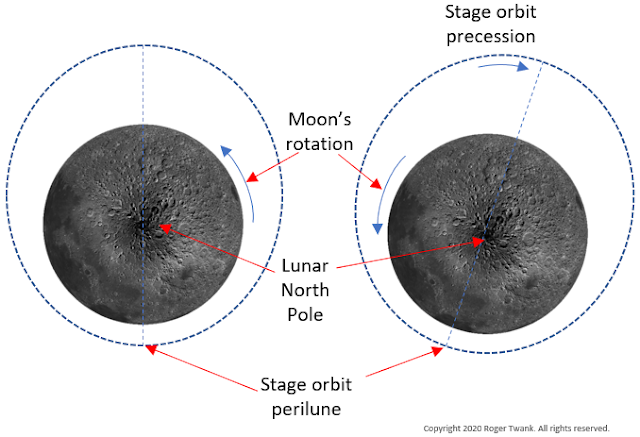 So now the 25-ish day period of the perilune altitude oscillation makes more sense. It is a combination of the 27.32 day rotation of the moon under the stage orbit, combined with a slower precession of the orbit. This precession may also tie in to the slower cycles that are apparent in longer runs. The rate of the precession suggests that the stage orbit would precess all the way around the moon in about 10 months, which is about the period of the longer cycle.

I don't know what exactly is driving the change to the eccentricity of the stage orbit, but the fact that it is tied to longitude certainly points to a couple of possible explanations. It could be mascons along the lunar equator, tugging the stage to a greater or lesser extent. Or perhaps, since the same side of the moon is always facing Earth, and therefore the moon's rotation is closely related to its position along its own orbit, the relative positions of the Earth and Moon are somehow conspiring to tug the stage orbit in different directions. It remains a mystery to me. Nonetheless, I am happy to have a better understanding of the most prominent feature of the orbit of Snoopy's tail end.