How could Snoopy be found?

If you've read my earlier posts you have seen how simulations of the Apollo 10 Lunar Module descent stage...aka "Snoopy"...show that the stage might still be in lunar orbit today, despite widespread expectations to the contrary.

If, indeed, by some miracle the stage orbit never did decay, and is still in orbit, how might we locate it? Experts have told me that optical methods won't work. However, there is another method that has been proven to work, and was used to locate a "lost" Indian lunar satellite in 2017. This method uses radar. Specifically, a dish in Goldstone is used as a transmitter, and another dish in Green Bank is used as a receiver.

In 2017, they knew that the lost satellite was in a polar orbit, so they could aim the radar just off of the moon's pole and wait for it to appear. Objects orbiting the moon come around about every two hours, so even if they were unlucky and the thing had just passed by when they turned on the machine, they would have to watch for two hours at the most.

How about Snoopy? If you read my earlier post about the stage orbit, you know that the stage is in a low inclination orbit...i.e. it follows the lunar equator. So to look for the stage they would aim the beam just above the rim of the moon, right at the lunar equator. And wait. And hope. For two hours at most? Not quite.

The same face of the moon is always facing the Earth. (Mostly.) Using the simulator, we can record the latitude and altitude of the stage as it crosses 90 degrees East longitude, that is, as it comes around from the back side of the moon. Here is a plot showing how that might have looked over 6 months of 2018. I have also drawn in a circle representing the size of the radar beam at lunar distance, which I was told is about 200 km wide. 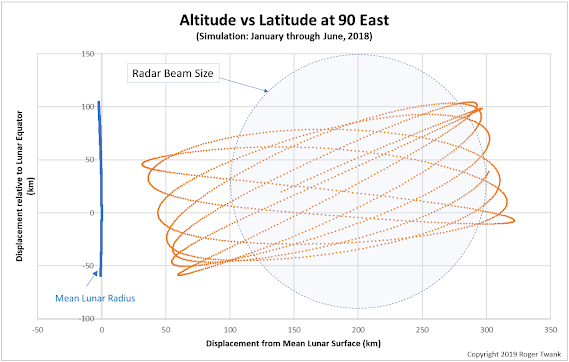 Each orange dot represents one crossing of the stage above the lunar horizon, so there are two hours between each dot. Some days the stage is coming "over the hill" at a low altitude, below 100 km, and then other days it is coming over at a higher altitude. At this point, after 50 years, although the simulations give an idea that the stage is still in orbit, there is too much uncertainty to know exactly where it might be in its orbit, so you can take the above plot as a kind of "probability map" of how high the stage might be as it comes around on any given orbit. But the key takeaway here is that with a single two-hour radar observation, the stage might pass under the beam.

Aha, I have a brilliant idea! Aim the beam closer to the moon! Unfortunately, an expert told me that they need to aim the beam "several hundred kilometers" away from the surface, so that the receiver doesn't get overwhelmed with reflections of the moon itself. So how long would they need to observe with the radar to either find the stage or conclusively prove it was not there? To answer this question, you need to look at how the altitude at the limb changes with time. 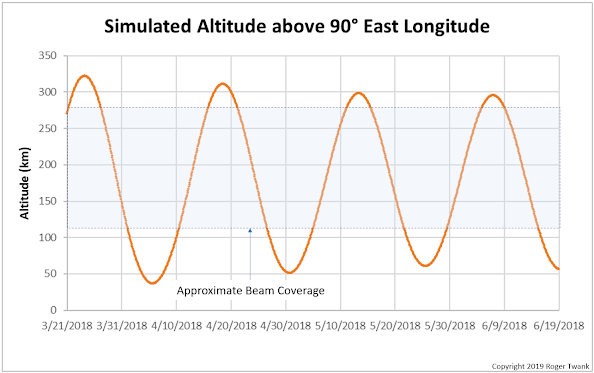 As the moon rotates once each month, always keeping one face towards the Earth, it also rotates under the eccentricity of the stage orbit. So the altitude of the stage as it comes into view slowly varies, over the course of a month, from the lowest part of the orbit to the highest, and back again. So if the first attempted radar observation happened to be on a "low horizon-crossing altitude" day, and found nothing, they could wait half a month and try again. And oh, by the way, when the orbit is crossing the eastern limb of the moon at low altitude, it is crossing the western limb at high altitude, so another strategy would be to observe each equatorial horizon of the moon for two hours on a single night.

Wouldn't it be awesome to locate this amazing artifact after 50 years? Please tweet a link to this post to @NASAJPL if you agree.