Previously I posted about a simulation of the Apollo 10 LM descent stage which shows that the stage remains in lunar orbit to the present day. How robust is this result? The data for the initial stage orbit comes from the Mission Report...no doubt it was the best information they had. But fifty years in lunar orbit is a very long time, and lunar gravity is notoriously "lumpy". What if a slight change in the initial stage orbit state meant the difference between stability and decay?

To answer this question, I ran a set of 50 simulations, each with the initial conditions randomly varied to cover any possible miss in the initial state of the stage. I tried to keep the variation wide, to insure I covered the real conditions, but I also stuck to reasonable limits. In fact the variations I applied were so wide that many of the orbits were not viable. To cover this, I ran each parameter set through one orbit, recording the apolune and perilune...the low and high points of the orbit. I cut any set that was lower or higher by more than 20% from the values NASA reported. Only about one third of the random sets passed this test. To get 50 sets for the final test I passed more than 150 sets through the initial 1-orbit screen.

Here is a plot of the perilune points for all 50 random parameter sets, showing their minimum orbit altitude after 10 years in orbit. It's a bit messy, as these orbits show quite a bit of variation. 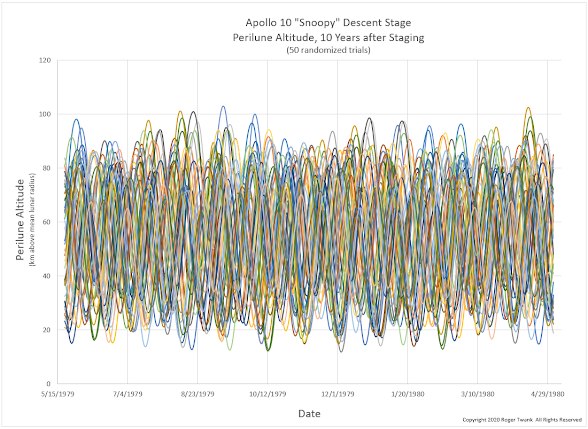 But the important thing to note is that in all 50 cases, the stage was still in orbit after 10 years. Each one of these plots is very similar to the "nominal" orbit I simulated initially. What if we just find the one of these, out of the 50, that got lower than any of the others, and plot it out by itself? Here it is. 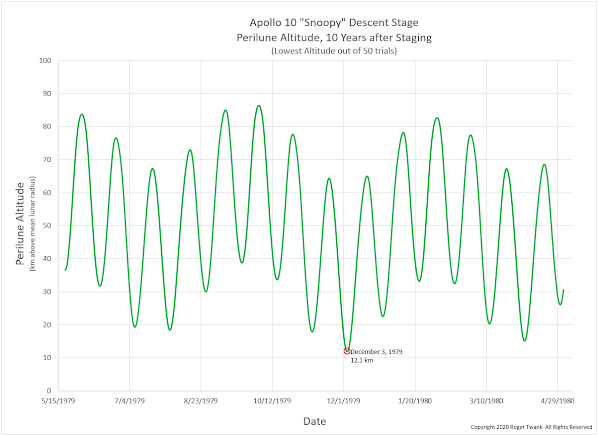 You can see that this one did indeed make a rather low pass, in December of 1979, to about 12 km above the mean radius. (Still well above any lunar mountains.) And if you saw my earlier post about the stage orbit behavior, you see the same patterns here. The oscillation over a period of 25 days, and a longer oscillation with a period of around 5 months. Why did this one get lower than the others? It was one of the lowest initially, so it is hardly surprising. The real question is whether this one is any less stable over decades  than the "nominal" orbit that I showed before. What happens if we simulate this orbit out to the present? Here is the answer: 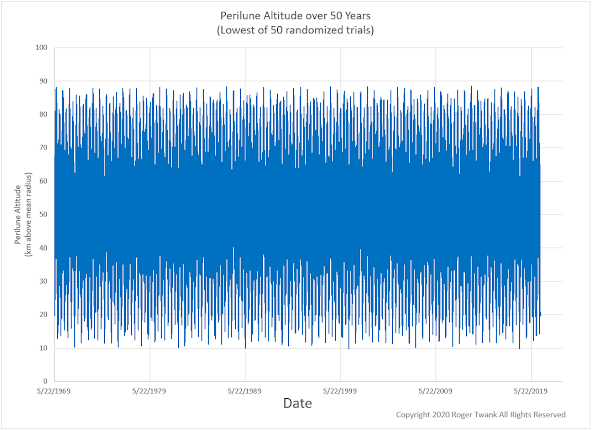 It is every bit as stable in it's orbit as the "nominal" case. There is no long term decay in evidence, and the simulated stage remains in orbit to the present day.

To me, this represents rather convincing proof. The result I got the first time I ran a simulation out to 50 years was no fluke. The nominal stage orbit is just one of a family of similar orbits that all exhibit long term stability. If something knocked the stage out of orbit during those 50 years, it wasn't the moon's lumpy gravity.