On May 23, 1969, Tom Stafford was concerned. The day before, he and Gene Cernan had performed the first lunar rendezvous in history. Now back in the Command Module, fully rested, preparing for the Trans Earth Injection (TEI) maneuver that would bring them home, Tom saw something out the window that gave him pause. Snoopy's tail was back.

(This transcript comes from the wonderful Apollo Flight Journal, but it also happened to occur during a TV broadcast, which you can find on YouTube.)

The stage had been cut loose in a looping orbit, low on the near side above the Sea of Tranquility, and high on the lunar far side. This "phasing" or "dwell" orbit was designed to be slower than that of the CSM, allowing "Charlie Brown" to overtake the LM and set up the right timing for the rendezvous. When Tom and Gene in the ascent stage ran through the rendezvous they caught up to the CSM and docked. The descent stage was left in the slower orbit.

The difference in orbital periods meant that one day later, the CSM was lapping the stage. Stafford wondered if the stage would be safely out of the way in time for TEI. One fortunate consequence of Stafford's concern was a "hack" on the position of the stage that he called out to Houston. Again, you can hear this on the TV broadcast, about 8 minutes into the YouTube video.

He calls out the stage position "between Taruntius P and K...I'm looking down now at 257 He's right down below us." This is a very valuable clue about the stage orbit. The craters Tom mentions are close to the lunar equator, at about 51.55 degrees East longitude. (You can see them with the LRO Quickmap tool here.) The "257" refers to the angle towards the stage, relative to the local horizontal. It means the stage was about 13 degrees below and behind the CSM. Here is a diagram to illustrate the situation. From simulations, the stage was at an altitude of about 93 km, and the CSM was about 99 km high. From the geometry, this means the CSM was at around 50.82 East, and Snoopy's tail was at 50.86 East at that moment. 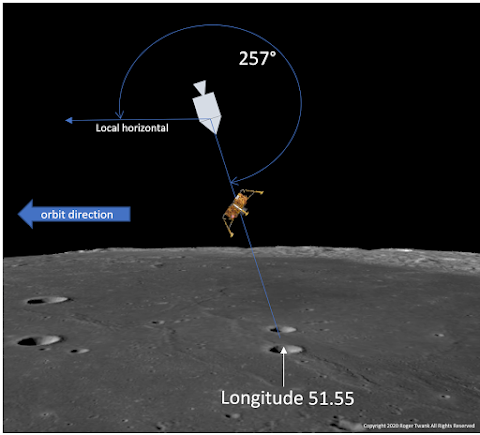 From the mission transcript this occurs at the Mission Elapsed Time of 132:16:10. This is really helpful to nail down the exact timing of the stage orbit. Think about checking the accuracy of a watch...you set it to a known time and then check it a day later...you can see how many seconds it has drifted ahead or behind. Same idea here. We simulate the stage orbit out to this time, and then look to see if the stage is coming up ahead or behind 50.86 East.

The process is easy. Start from data published in the Apollo 10 Mission Report, and run a simulation of the stage orbit. Stop this simulation at the time of the sighting, and check the longitude. The sighting time translates to UTC of 5/24/1969 05:05:10.00. When I run the stage simulation out to that time, using the nominal values from the Mission Report, the longitude from the simulation comes out at 49.85 East. Not bad! It's off by about a degree, which translates to about 30 km or about 18 miles at the lunar equator. Remember that these things were moving about a mile per second in their orbits, so that means the simulator ran the stage past the target longitude about 18 seconds early.

For this adjustment, I keep almost everything as it is in the mission report, adjusting only the initial velocity. This is where orbital mechanics gets fun! Since the stage is going too far, we need to...speed up? Yes indeed...we need to go faster to slow down!  It's about as counter-intuitive as it can be, but that's how it works. By adjusting the initial stage velocity upward, the stage is driven into a (slightly) higher orbit. Because it's in a higher orbit, it takes longer to go around. Since it takes longer to go around, when we stop the simulation at the right moment, the stage is farther back. It only takes a few tries to dial it in, and these simulations take only 20 seconds or so to run, so very quickly I have a simulation that puts the stage right at 50.88 East at 132:16:10. The tweak to the stage velocity to get this to line up is just 0.27 feet per second. Beauty!

After playing the same game with the CSM orbit, now I have two simulations that put the two spacecraft in the right place at the right time. Here comes some real fun! GMAT, the simulator, can co-simulate two different spacecraft. Now we can see the dance that was making Tom Stafford so nervous. Here is a link to the GMAT co-simulation script that I posted on GitHub.

First off, let's look at what happened while the crew was catching up on their sleep. The CSM, in the faster orbit, pulled away from the stage. Initially, around the time they jettisoned the LM upper stage, they were about 100 degrees of longitude ahead of the lower stage. Over the course of the night (it was night time in Houston) and next day, this lead increased, until they were 360 degrees ahead...they had caught up to Snoopy. 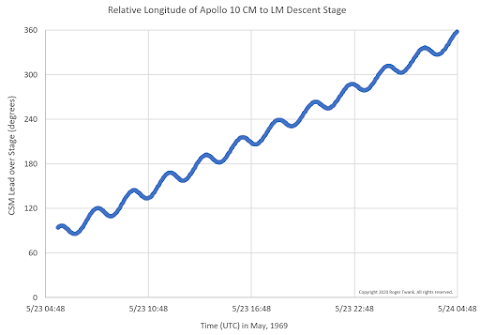 The "wiggles" in this line are due to Snoopy's eccentric orbit...down to within 20 or 25 km of the surface, then up to 340 km. When Snoopy dropped down lower, he would move faster than the CSM, and gain ground. When he went around the back side and went higher, he would move slower than the CSM, and fall behind. Overall he was losing ground. (Remember, that was the purpose of the "dwell" orbit.)

The plot below shows the position of Snoopy, relative to the CSM, and it makes clear how the stage would gain and lose ground during each orbit. The horizontal scale is compressed by 5x to fit several orbits onto the plot. Notice that Snoopy would mover farther ahead as he dropped down below the CSM, then fall farther behind as he climbed up higher. When the TEI burn started, Snoopy was safely away, about 1200 km behind, so it turns out that Tom's fears were unfounded. 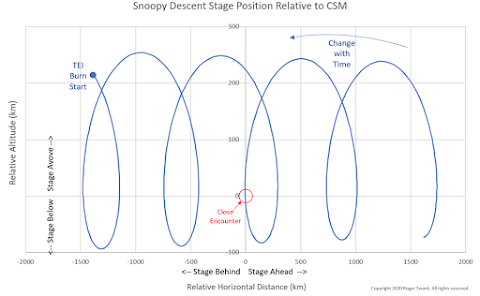 Notice how close Snoopy came to the CSM, in the red circle marked "Close Encounter". (On this plot, by definition the CSM is at 0,0 in the center of that circle.) By zooming in we can see just how close they came: 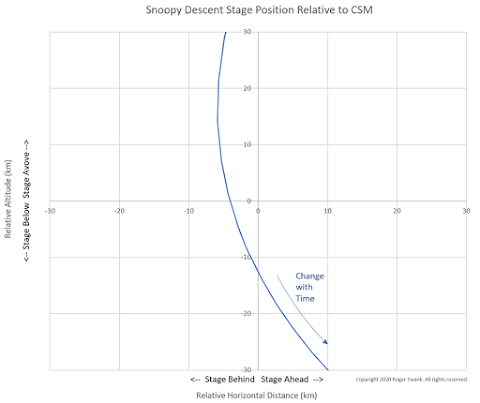 As Snoopy dropped down behind the CSM, the stage seems to have passed within 3-4 kilometers before moving away. Nowhere near an actual collision, but too close for comfort!

Fortunately for all concerned, the stage drifted past harmlessly, and was quickly forgotten...until now. Perhaps we might hear some news about this long lost artifact someday if, indeed, it has remained in a stable orbit for all these years.