In this post I will show the behavior of the stage in the first days, weeks, and months after it was jettisoned on May 22, 1969.

The stage was jettisoned into the "Phasing" orbit, which rose to around 352 kilometers high on the far side of the moon, and dropped down to around 22 km on the near side. The low point in the orbit, called the perilune, was near the Sea of Tranquility where Apollo 11 would be landing in two months.

Using the GMAT simulator I described earlier, you can enter the orbital parameters from the Mission Report, Table 6-II, and run the simulation for a single orbit. First off, here is the GroundTrack view that GMAT generates: 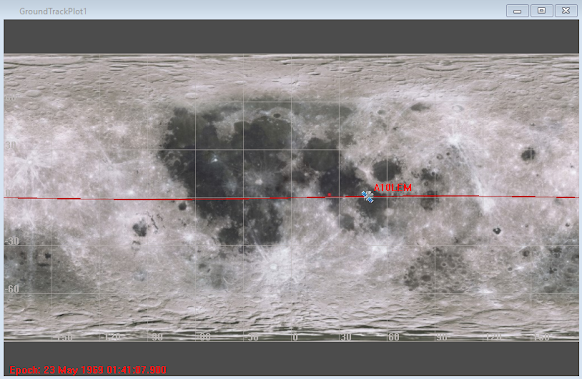 You see the stage in a low inclination orbit, very closely following the lunar equator. I added a small red dot showing where Apollo 11 landed, and you see that they passed just south of that site, just right of the center of this plot.

Here is GMAT's "Default Orbit View" of the same orbit, with a view from above the moon's north pole. 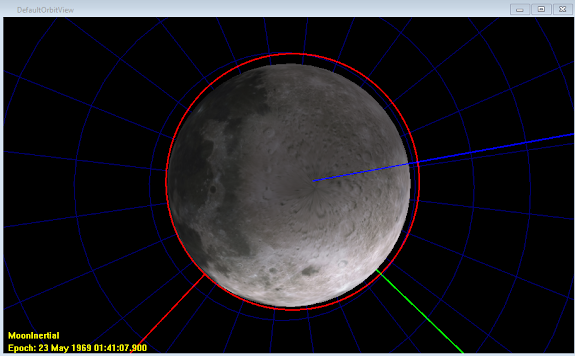 You see that the orbit drops down closer to the surface on the lower left, and then rises higher around on the far side. The red axis points towards Earth, and the blue axis is the north polar axis. In this view the orbit looks very nearly circular, which is indeed the case. The eccentricity of the orbit is actually not so high, relatively speaking.

Finally, here is a GMAT X-Y plot of the stage Altitude versus elapsed seconds. 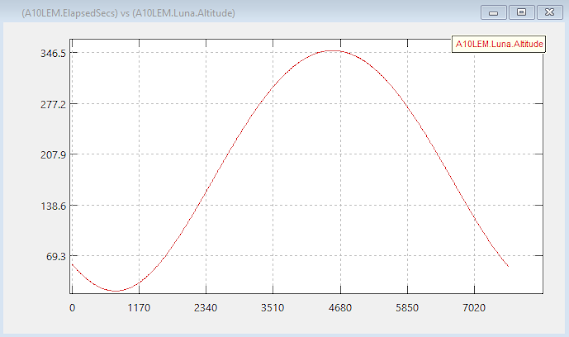 Now the low and high points of the orbit are much more exaggerated. The "Altitude" is relative to the "mean lunar radius", which is sort of like "sea level"...the size the moon would be if it melted into a perfect sphere. (This altitude does not take into account lunar terrain.) The orbit drops down to within 22 km, and then rises up to around 350 km. (BTW, that "0" down in the lower left corner is zero seconds, not zero km.) This is one complete orbit, and the total time, i.e. the period, is around 7611 seconds...just over 2 hours.

So what happens when you run the simulation out longer? Here is a similar plot showing the altitude over the first 5 days. 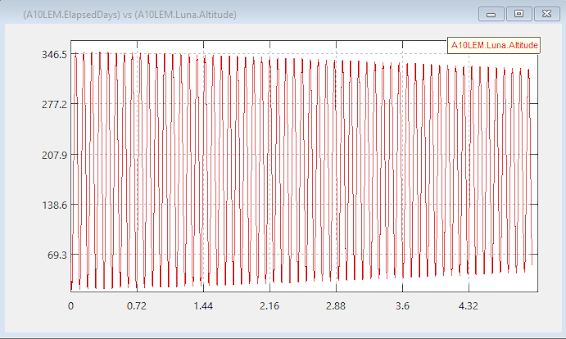 You see the same highs and lows, but a new pattern begins to emerge. The lows are slowly getting higher, while the highs are getting lower. The orbit is becoming more circular, and less eccentric. This seems to be one of the first reasons that the stage does not quickly decay out of orbit. Later I will post the results of a study that shows more about this pattern.

OK, now let's run even longer, simulating the first 60 days in orbit. This will put the simulated time into late July, 1969, when Apollo 11 returned to the moon. 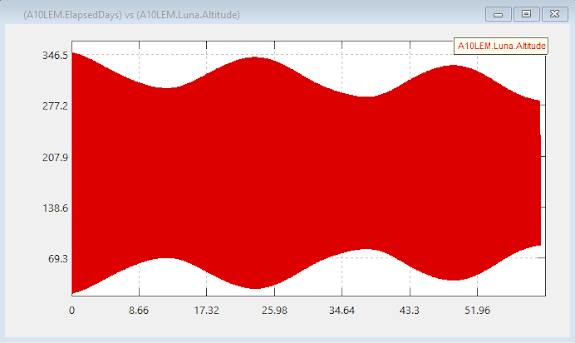 The first thing to notice is that the stage is still in orbit at the time of the Apollo 11 landing. Something might have happened since then to bring the stage down, but I feel quite certain that it was still orbiting the moon during Apollo 11. Then notice the pattern of oscillation in the eccentricity. The orbit becomes more circular for the first 12 days or so, but then starts to become more eccentric again. After about 25 days the orbit is nearly back to its original apolune/perilune. (But not quite, you notice.) This 25 day period of oscillation of the eccentricity is a pattern that will continue, and when I run simulations out to the present, this same 25 day oscillation remains a key feature of the stage orbit.